One of chamomile’s oldest – and sometimes, forgotten – uses, is as a natural remedy for menstrual pain. Yep, these beautiful yellow flowers have really amazing anti-inflammatory properties that every woman should know about. So, if you’re curious to learn more about the use of chamomile for period pain, then keep reading because we’re going to explore:

Note: this post contains affiliate links and I earn a commission (at no additional cost to you)  if you use them to make a purchase.

4 REASONS WHY CHAMOMILE IS GOOD FOR MENSTRUAL PAIN

Research shows that chamomile has anti-inflammatory, antispasmodic and stress-releasing properties that are beneficial for menstrual pain as well as other PMS symptoms (such as anxiety and mood swings).

Here’s a closer look at how chamomile is actually able to do all this (the main reference for this information comes from this paper).

3. Supports The Liver and Hormones

4. May Support The HPA Axis

One more in which chamomile is beneficial for the menstrual cycle is that it seems to modulate the HPA (hypothalamic-pituitary-adrenal) axis.

The HPA plays a key role in the menstrual cycle because the more active this axis is, the more cortisol the body releases.

Unfortunately, an increase in cortisol – especially when it’s chronic – can contribute to painful cycles as well as other menstrual imbalances.

So, doing everything you can to support proper functioning of the HPA will help to ease period pain.

HOW TO MAKE AND USE CHAMOMILE TEA FOR PAINFUL MENSTRUAL CYCLES

Making a truly effective chamomile tea for pain usually requires a more herb than what is in a standard tea bag.

So, I suggest getting yourself a bulk supply of chamomile. You can usually find this at some local health stores. Otherwise, there are plenty of online retailers that you can get it from.

One company that I highly recommend going with is Mountain Rose Herbs. I’ve purchased herbs (and clays) from them and the quality is always top notch. In addition, everything they carry is organic, so you don’t have to worry about the unhealthy effects of pesticide residue on your precious herbs.

NOTE: make sure to use a teapot that fully covers the tea and doesn’t allow any steam to escape. Many of the beneficial compounds in the herb are volatile and can escape via steam while it’s steeping.

NOTE: this makes a very bitter tea. However, since you will only be drinking a small amount, you could take it down in a few gulps. If necessary, add some raw honey to make it more palatable.

HOW TO USE CHAMOMILE OIL FOR PERIOD CRAMPS

There are various types of chamomile essential oils on the market, including Moroccan, German (aka Blue) and Roman chamomile.

They all have anti-inflammatory and pain-relieving properties, but for period pain you want to go with German (Blue) chamomile oil (latin name: Matricaria recutita).

In fact, one of the medical papers I referenced earlier in this article indicated that the stronger the blue color, the better. This is because that deep blue shows that there’s a higher concentration of the compounds that ease PMS pain.

Now, when it comes to using blue chamomile oil, here are the steps to follow:

NOTE: you can also blend chamomile oil with other essential oils for menstrual cramps like peppermint, clary sage, copaiba or frankincense.

A tincture is the most convenient way of using chamomile because there’s nothing to prepare.

You simply ingest the tincture according to the manufacturer’s instructions.

Now, if you’re not familiar with tinctures, it’s an extract of an herb in alcohol (in the same way that tea is also an extract, except you’re using water instead of alcohol).

If you’d like to try this method, then go with this chamomile tincture.

Chamomile is so much more than just a sleep herb. It’s a potent anti-inflammatory that can give you a greater sense of physical and mental ease during your period.

I hope this article has helped you gain a better understanding of how to incorporate chamomile into your routine.

How To Make The Best Smoothie for Period Cramps (That Actually Works!)

How To Sleep With Menstrual Cramps: 10 Tips To Get Relief and Feel Rested

Healthy meals don't have to be boring! Grab one of my hormone-friendly recipe collections and start your transformation without sacrificing flavor!

You have Successfully Subscribed! 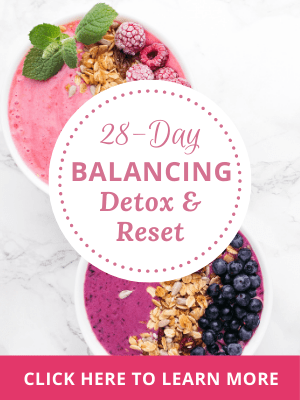